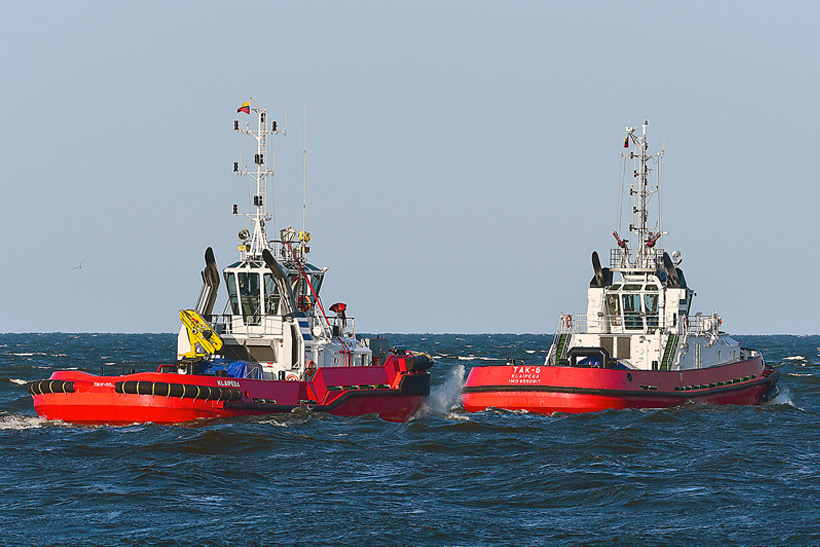 Earlier in 2012 DSB sold two sister second hand Damen Multicat 1908’s to Australian Buyers. The Multicats were located in the Middle East and were transported to Australia by Heavy lift ship.

They will be used by her new Owners to assist harbour operations on the West Coast of Australia.

DSB Offshore in collaboration with Norwegian co-broker arranged the sale of Damen Dredgehelper 2510 ‘MCS Elly’ to a Norwegian sea service company in Autumn 2012. MCS Elly will likely be the first multicat type shallow draft workboat to operate in Norway.

MCS Elly was built in 1997 and has a length of 25.37m and a draft of 2.4m. Her bollard pull is 18t and she has Heila HLRM 140t and Heila HLRM 70t deck cranes in addition to a 100t anchor handling winch. There is heated and air conditioned accommodation for 4 persons.

Sale of Self Propelled Splitbarge – 2012

In the early part of 2012 DSB Offshore negotiated the sale of self propelled Splitbarge ‘Plateras’ from Spanish Sellers to Lebanese Buyers. The splitbarge has a hopper capacity of 750m3, a length of 58.3m and a beam of 11m. She is propelled by 2 x GM 350bhp Schottels.

‘Plateras’ will be used by her new Owners in various marine construction projects in Lebanon.

DSB Offshore arranged the sale of a 230t Huisman electro hydraulic pedestal mounted offshore crane located in the Netherlands to UK Buyers ‘Fugro Seacore’. Built in 2009 the crane will be used by the Buyers as an upgrade on one of their existing vessels. 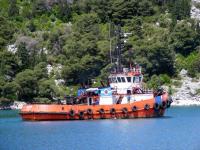 In 2011 DSB sold the 30tbp shallow draft twin screw tug Alioth from Croatian Sellers to Russian Buyers. Alioth was built in Singapore in 1990 and has a length of 28m and a draft of 3m. Her Detroit diesel main engines produce 2 x 90kW and she has Schottel bow thruster. Her elector hydraulic towing winch is rated at 50t.

In Autumn 2011 DSB Offshore sold the 50tbp FiFi 1 ASD tug ‘Uran’ from Italian Owners to German Buyers. The tugs new home port will be Cuxhaven in Germany where she will be performing harbour duties as well as providing towage and anchor handling services in the North sea. Her new Owners will be carrying out several upgrades to the tug including the installation of a 120t stern roller, 100t tow pins and shark jaws which will enable the decking of 7t delta flipper anchors. A 30t/m crane will also be added and the tug will be upgraded to A2 navigation.

DSB Offshore’s multilingual approach allows them to represent buyers and sellers all over the world.“

In early 2011 Danish Buyers ‘Svendborg Bugser’ took delivery of 40tbp twin screw tug ‘Sea Regent’ from Sellers in Bahrain. The tug which was built by ‘Forward Marine’ in Malaysia in 2007 has a length overall of 31m and a max draft of 3.5m. She has now been renamed ‘Hunter’ and is providing towage services in Northern Europe.

In Summer 2011 DSB Offshore brokered the sale of 45tbp shallow draft push tug ‘Lydia D’ to clients in Australia. She was built by the Neptune Shipyard in Holland and has a length of 31m and a minimum operating draft of 2.2m. Since being delivered to Australia by heavy lift ship the tug is now being used to tow and assist the mooring of barges in shallow draft waters on the West Coast of Australia.

DSB sold the anchor handling tug ‘Castor’ from Swedish Owners to global commodity producer and marketer ‘Glencore’. The tug was built by the UK yard Mctay Marine Ltd in 1993 and has a length of just under 30m and a bollard pull of 32t. Her Caterpillar 3512TA engines produce 2350bhp and she has 4 bladed propellers 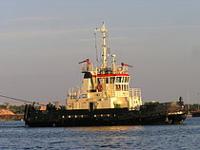 in kort nozzles. Her new Owners will be using her to support their operations in Congo, West Africa.

DSB secured the sale of iceclass tug ‘Priitta’ from Finnish Sellers to Norwegian Buyers. The tug was built in 1989 in ex Yugoslavia and has an overall length of 21.7m, a bollard pull of 13t and 2 x fixed pitch propeller Schottel SRP 300’s. Her equipment also includes 2 x FiFi monitors and a hydraulic double drum towing winch mounted aft.

In 2010 DSB Offshore sold the first ever Damen Shoalbuster for operation in Australia. Shoalbuster 2609 ‘Tarka’ has a bollard pull of 30t and a draft aft of 2.5m. Her deck equipment includes an Effer 1200003SL deck crane, a Ridderinkhof 50t towing winch and a 3 x Hydraluic tow/ anchorhandling pins. She was built by the Damen Shipyards in 2004 and operated for several years in the North Sea in both anchor handling and towage operations. Tarka travelled to South Australia under her own steam and managed to secure several towages on her delivery voyage.

DSB Offshore negotiated the sale of 38tbp anchor handling tug ‘Smit Belait’ from Singapore Sellers for work in Botany Bay. The tug was built in 1983 by the Sing Koon Seng shipyard in Singapore and has an overall length of 42m and a draft of 4.15m. Her propulsion system comprises of 2 medium speed Sork Wekspoor 8 FHD-240 mian engines delivering a total of 3120bhp. She has 2 controllable pitch propellers in fixed nozzles and an electric driven 300hp bow thruster.