Britain’s largest ever warship is due to squeeze out of its dockyard for the first time as early as Monday afternoon, as the ship heads out on sea trials. 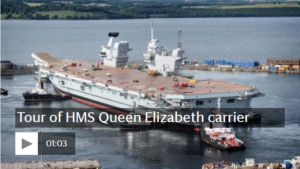 Voith Schneider tugs ‘Tummel’ and ‘Carron’, on exclusive sale via DSB Offshore, maneuvered the huge aircraft carrier out of Rosyth.

The 65,000 ton HMS Queen Elizabeth is expected to slip out of Rosyth dockyard and into open water through an exit with only 14in clearance on either side and 20in of water under the keel.

The aircraft carrier will then edge along the Forth under three bridges, including the landmark rail bridge, with a little over six feet to spare.

The trials mark the latest milestone in the nearly decade-long building of the Royal Navy’s two carriers, at a cost of more than £6bn. The Navy is also preparing for the warship’s first appearance to attract a concerted Russian spying effort, with submarines, ships and planes try to get a good look at the UK’s new flagship.

A Royal Navy warship is expected to escort HMS Queen Elizabeth, while shore-based helicopters look out for submarines as commanders try out the warship in the North Sea and Moray Firth. Commander Fiona Percival, head of logistics on the ship said: “[The Russians] will come and look, but they look at everything.”

Cdr Mark Deller, said: “We will go where it’s best to go and not where it’s best for a Soviet nuclear to go, so the reality is we can probably look after ourselves as long as our escort is in the right place at the right time. You don’t have to hang around and endure it, you can move away and go somewhere else.”

Sailors and engineers have worked round the clock getting the vessel ready. A total of 1,000 sailors and contractors will be onboard for the first six weeks of testing. Crew have spent hours each day carrying out safety drills for fires, flooding and personnel overboard. More than 650 doors and hatches have been checked to ensure they are watertight and fire safe.

Ian Booth, managing director of the defence industry alliance behind the ships, said: “The incident with the fire in London really brings it home to you, you don’t take chances with any incident on the ship, whether it be flooding or fire.”

Engineers hope Monday’s tides and weather will be suitable for the 920ft vessel to emerge from the Rosyth basin where it has been built, but a final decision will not be made until lunchtime. 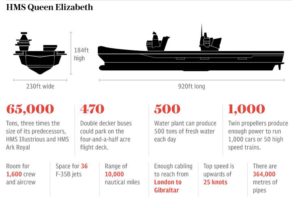 The first steel was cut on the carrier eight years ago but it will not be sent on operations until 2021. Early deployments are expected to see US Marines F-35B jets embarked alongside British planes, to make up for early shortages of UK jets.

The Royal Navy has not had an aircraft carrier since the defense cuts of 2010.

The arrival of the new carrier comes as the Navy is facing a budget black hole of around £500m each year and the demands of manning the new ships have been accused of causing shortages elsewhere.

Critics of the carriers have also claimed they are expensive white elephants that are too vulnerable to new high speed missiles.

Capt Jerry Kyd, commanding officer, said: “There is nothing on the globe that is invulnerable, whether that’s a city, a car, an individual, or a ship. We are not shy in the military to understanding the risks and how we mitigate that in the theatre of war.

“If you look at all the premier nations around the world, why is it that every nation in the top tier is investing billions of dollars in aircraft carriers? Is it just us, or has everyone got it wrong? The reason being is that they provide the government, very simply, with an incredibly flexible tool. It’s not just about war-fighting. This is about deterrence, coercion, signalling, proving a huge sea base for disaster relief, humanitarian assistance, defence engagement.”

He said 2021 “will be the first time we will deploy this ship in anger”.

After trials begin this summer, the ship will move to its new home in Portsmouth this autumn. Trials for planes and helicopters will take place next summer.

The flight deck is more than four acres in size and the ship can carry up to 36 F-35B stealth jump jets.