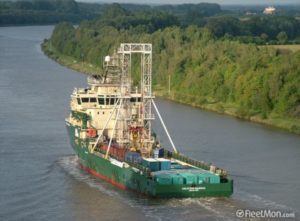 “In fact, MCS, as the only private South African manning company with ISO 9001 accreditation, has for the past 14 years successfully trained and placed in excess of 880 South African and African officers, ratings and cadets on local and international vessels, among them the highest number of sea-going, black female seafarers in South Africa,” says Lester Peteni, MCS Chairman. The company also provides bursaries to Lawhill Maritime Centre graduates to enrol for tertiary Maritime Studies students at the Cape Peninsula University of Technology. The South African Government, in recognising the important role played by the maritime industry in South Africa – and its potential to provide training opportunities and employment for young South Africans – has introduced a number of initiatives with the aim of growing South Africa’s Oceans Economy under Operation Phakisa. One of these initiatives – which also forms part of the 2017 Maritime Transport Policy – is to encourage more vessel owners to register their vessels under the South African Flag. According to Daniel Ngubane, Group CEO of MCS. “The registration of the Greatship Manisha on the South African Ships Registry, supports this initiative and offers several important advantages. “These include having the opportunity to provide employment for South African officers and ratings and most importantly, being able to offer young South Africans, who have completed their theoretical training, the opportunity to obtain the required, practical, seatime experience which forms part of their international qualification.”

Two South Africans have been serving on the ultra-modern vessel – which was previously registered in Singapore – and the move to the South African Ships Register will lead to a further seven South African seafarers joining the vessel upon registration. “Our aim is to have a 100% South African crew complement on this vessel and this will be achieved as South Africans with the requisite experience and skills in operating this type of vessel become available, ” says Ngubane. The South African crew complement will also include a Second Officer, Third Officer, Fourth Engineer and 6 ratings. Provision has also been made to take six South African trainee cadets on board once the vessel has been recognised by the South African Maritime Authority (SAMSA) as a designated training vessel. The vessel, which has a total crew complement of 17, will deployed off the coast of Mossel Bay. There are currently only two merchant vessels on the South African Ships Register, which means the South African economy and its security of trade are dependent on ships owned and regulated in foreign countries. Currently, an estimated 96 percent of South African exports to the rest of the world move on ships registered outside the country. According to the Maritime Policy (currently in draft format), South Africa’s share of fleet ownership in terms of volume is 2.233 thousand deadweight tonnes (DWT). Ship ownership currently stands at 0.13% of world total. National flagged fleet represents less than 0.01% of world total. The growth and expansion of ships owned by and registered in South Africa is largely dependent on the regimes governing the ownership, financing and registration of ships. According to the draft Policy, deliberate promotion of vessel ownership and registration of ships has been largely absent and the dramatic loss of locally owned fleet to foreign flags clearly indicates the need for policy challenges in this regard. The main policy objective in this regard is to ensure a levelled playing field for present and future South African shipowners and operators vis-à-vis foreign competition and to attract both domestic and foreign investment in the local maritime industry. However, there are a few issues that relate to the ownership, financing and registration of ships in South Africa that require attention if the playing field is to be levelled. National Treasury has already in 2013 introduced a package of tax incentives to attract foreign ship registration with the South African ship register. In addition to these, tax incentives for domestic shipping and officers or crew working on ships were also introduced. But there is a need to further investigate and consider non-tax incentives to support growth of the domestic ship ownership market. Says Peteni, “Although Singapore is widely considered as a more attractive ships register, the decision to move the Greatship Manisha onto the South African register is not only a perfect example of private companies and government working together to achieve a common goal, but it has been taken in the interests of supporting the growth of the South African maritime industry and Greatship should be commended on supporting this move.”

Challenge is the education, training and skills development in South Africa

According to Peteni, South African seafarers are highly regarded internationally and demand for senior South African officers is particularly high. “Furthermore, South Africa offers world-class training and certification standards which not only allows us to employ high quality seafarers on South African registered ships, but also creates an opportunity for South Africa to play a more active role in the global seafarer supply market.” “We at MCS, believe there is enormous potential to support Governmental aims by creating awareness of career opportunities at sea, thereby increasing the number of trainee seafarers, as well as the number of training berths made available to them. Registering this vessel on the South African flag represents a step in the right direction, and we are looking at adding further vessels to the SA Ships Registry in due course.” For the past 13 years, MCS has worked closely with international shipowners and managers to provide berths for South African cadets, a collaboration which Ngubane describes as ‘highly successful and mutually beneficial ’as it has given them the opportunity to gain seatime while providing vessel owners and managers with additional certified, qualified and English speaking manpower.’