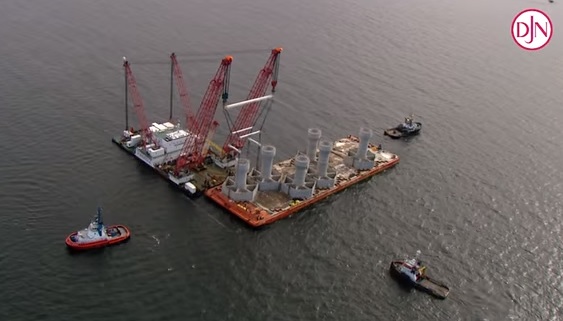 ‘DN143’ began her career as one of the youngest of the Sainty barge sisters, constructed at the Sainty Shipyard and designed to deliver stacked cargos of newbuilding river barges from China to Holland and Germany.

Then in 2013, bought by the Jan De Nul Group (JDN), she landed the starring role of her career to date. 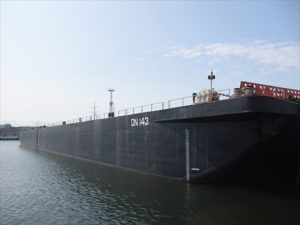 Huge foundations were constructed on top of her enormous deck while she was moored in the sheltered waters of the Port of Zeebrugge. Then, loaded with the approximately 22,000 tonnes of concrete foundations, she was towed 1,500km, through the Skagerrak and Kattegat sea areas to Sweden where the foundations were installed.

The barge, now owned by Turkish company, Karpowerdeniz joins a growing fleet of power generator vessels supplying power to some of the remotest regions of the globe. She is not the first Sainty barge to serve this purpose. One of them, ‘Sultan Esra’ was converted from ‘DN143’s sister barge and now equipped with 235MW power is moored off Lebanon where she is providing a significant portion of the country’s power supply!

‘DN143’ joins her sister barge in going from power to POWER!

Documentary featuring ‘DN143’ in the role she played in JDN’s Karehamn windfarm project: